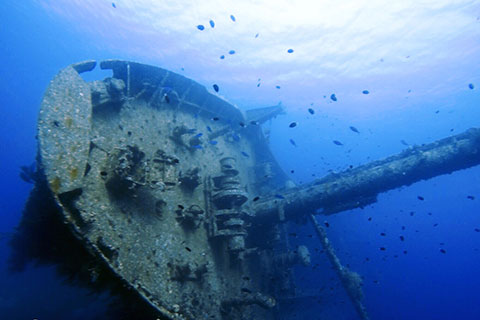 The Cedar Pride was originally built in 1964 by Shipping Aznar in a spanish shipyard. Years later the ship was in ballast at the port of Aqaba when a fire broke out in August 1982. It sustained extensive damage to her engine room and unfortunately two members of the crew were killed. On November 1985 the Cedar Pride was towed to a position just off the coast of Aqaba and sunk by the late King Hussein as a scuba diving attraction and artificial reef.

The Wreck of the Cedar Pride is the most famous dive site in Aqaba and definitely a must-do. It consists of a 75 meter long cargo ship resting on a bed of two coral gardens. With a maximum depht of 26mt, it is full of enchanting marine and coral life, such as gigantic Napoleon Wrasse, Blue Triggerfish and even the occasional Barracuda or Eagle Ray.